"Achieve a vision beyond your sight." The motto of 2020 Vision Quest

"Believe in your possibility and then find a way to get there." - Randy Pierce

The symbol of the Boston Marathon is the unicorn: 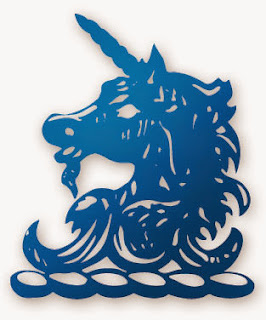 In stories and myths about unicorns they are strong, fast, and hard to catch; an appropriate image for the Boston Marathon especially for those trying to qualify for Boston.

But can you imagine trying to qualify for Boston without your sight trusting in a sighted Guide to help you navigate your way through 26.2 miles in under 5 hours? And to take on this challenge 8 years after coming out of a wheelchair having been wheelchair bound for over 2 years? And to have met your Guide only once in a 10 mile run before you ran the marathon to try to qualify for Boston? That's just what Randy Pierce did at the Cox Providence Marathon yesterday.

On Saturday, I saw this post from one of my Facebook friends, Thor Kirleis, who ran his 100th marathon at the 118th Boston Marathon on 4/21/14:

Friends, on Sunday I will be teaming with Randy as his Guide in a special quest to get him a Boston Qualifier at the Providence Marathon. Although I feel confident in our teamwork, that we will do what we can to meet the goal, please send both of us positive energy, because this will not be easy for either of us, especially in the later miles.

Randy can use the good vibes, as this is his first marathon since going blind -- it is not easy to train properly when visually impaired since finding guides for training runs is very difficult. Although his longest run to date was only 15 miles, he is very strong from having recently completed hiking all 48 of the 4000 foot mountains in the Whites. Plus, he was very comfortable on our 10 mile jaunt last week, talking the entire way, and I feel we could double that before the going gets too hard, which by then will be 20 miles in.

I will need your energy too, as being a Guide requires 100% heightened awareness at all times and is mentally draining; plus, having one hand on a tether for so long is akin to running with one hand behind your back, like a car moving along with a bad piston.

I'll be sure to report back on Sunday!

I had no idea what Randy's back story was. Having worked with the visually impaired veterans when I was a social worker at the VA, I had a deep appreciation for the challenge that Randy and Thor were taking on and I joined my energies to so many on Facebook and in Randy and Thor's communities to set an intention for a safe run and for the ever elusive BQ.

2020 Vision Quest posted:
We want to give a special shout out to Thor Kirleis who will be Randy’s Guide at Sunday’s Cox Providence Marathon by Cox Providence Rhode Races. Thor and Randy met through a blind runners’ group here on Facebook, had a great shakedown run last weekend, and are ready and excited for Sunday's big day. Thor recently finished the Boston Marathon (for the 8th year in a row!), marking his 100th marathon! What an accomplishment!

Best of luck to Randy and Thor as they go after that Boston Marathon qualifying time!

And on Sunday, Thor posted:
Randy and I got him his Boston Qualifier with plenty of time to spare. Thanks everyone for your encouragement and support. We felt it!

Here they are at mile 9. I was deeply moved when I saw this photo. Without having read the back story and having only had a cursory read of Thor's post the Saturday before (see below), I could feel their special bond and the energy, the love and intention that flowed between them as they joined together for a common goal: 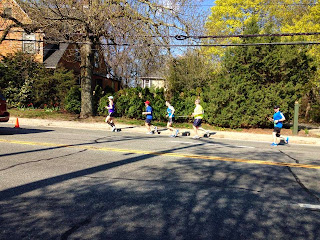 As I was doing research for today's blog, I discovered Randy's back story.

Randy Pierce's story will give you goosebumps and chills!

It began with Randy Pierce and his Guide Dog, Quinn, climbing all 48 of the rugged 4000+ foot peaks in the New Hampshire White Mountains. Using these and other adventures to raise awareness, the core mission will continue as Randy will work to inspire others to set their own visions and help them achieve their goals through outreach, education and support.
Our mission:
2020 Vision Quest inspires people to reach beyond adversity and achieve their highest goals -- personal, professional, and philanthropic. We believe in leading by example, in climbing the highest peaks, and in sharing our successes and challenges with each other. Funds raised through these endeavors will be given to two remarkable organizations which benefit the visually impaired community: Guiding Eyes for the Blind, and the New Hampshire Association for the Blind.

It's not just what Randy does, but how he does it. He has a humble heart as expressed in his after BQ Facebook post in response to my post, "Run the race set before you with endurance."

Endurance was challenged pretty seriously on my end. Both from the stamina and from the pain the buildup by later in the race. Fortunately I had the perfect guy to make today a success

to which I replied:
And you dug deep Randy to achieve your goal. Yes you did have the perfect guy to make today a success and I believe Thor would agree - you had yourself because although Thor was there to cheer you on, support and guide you, it was ultimately your choice to move beyond the pain with determination and courage to finish the race that you chose to run!

And as for Thor?

He came back from an injury that severed the major nerve in his left leg. He was told he might never walk again nonetheless run again. As he said to me in a Facebook chat:

The 100 marathons, for the most part, came out of that severed nerve injury. I never thought I would be able to walk normally again, let alone run another step. While I was still down, I made a promise to myself that if I ever got back to running, I would run at least a mile a day, each and every day, to celebration the simple fact that I can run. That was 11 years ago. I have held up that promise.... One of the reasons I do what I do is because I thoroughly believe that life is just too damn awesome to sit on the sidelines for. I learned through lots of bumps and bruises that our dreams and goals, even those so lofty to be thought of as untouchable, are limited by our own fear of failure. To lift that blanket, and there are endless possibilities.

As for me and Randy, we have a mutual respect for each other that I know will only make teamwork easy. I am here for one reason -- to help Randy be his best, get in a Boston Qualifier, and make sure we both have fun. I want to not only Guide him, but I also want to paint the picture that is the true experience of Randy achieving yet another goal toward 2020 Vision Quest.

Yesterday, at the Cox Providence Marathon, Thor helped to lead the way for Randy to achieve what few are able to achieve. He helped to make possible what Randy believed was a possibility. He caught the Unicorn and qualified for Boston 2015!

Mary, what a wonderful post. Thor and Randy were very inspirational. They are both amazing men!

I personally felt so comfortable with Thor as Randy's guide - he is a wonderful spirit!

Mary McManus
Mary McManus, MSW has known challenges throughout her life beginning at age 5 when she contracted paralytic polio in one of the last polio epidemics in the United States. She endured years of abuse at the hands of family members. At the age of 53 she was diagnosed with Post-Polio Syndrome, a progressive neuromuscular disease and was told to prepare to spend the rest of her life in a wheelchair. She refused to take the diagnosis sitting down. Her pen became her divining rod for healing harnessing the power of the mind/body connection through poetry. She embarked on a journey that took her from taking a leap of faith leaving behind her award winning career as a VA social worker to the finish line of the 2009 Boston Marathon, and beyond. Mary holds a BS in Communications from Boston University, an MSW from Boston College and many fond memories of her veterans and their families who blessed her life when she worked at the VA. She lives in Chestnut Hill Massachusetts with her husband, Tom, and their lovely cat Jamie.